As we age, we look for reasons to live, love and laugh. At the "very" tender age of 62 I look for hobbies and distractions that won't leave me bruised, battered and broken...such as riding a two wheeled bike on a narrow bike path. To minimize the hazards of riding I lowered my sights and my seat to ground level by investing in a 3 wheeled recumbent trike. I still flipped the blasted thing! Not a scratch on me...until I knocked my head on the lift-gate of my car loading my bike. Brilliant.

Surely there is something I can do that is not dangerous that allows me to be active outdoors without breaking a bone or a sweat. My most recent pastime has turned into an ugly obsession. I purchased the Weed Zinger on the chance that it would simplify the tedious task of removing dandelions without having to bend over or pound the release mechanism...and that is when everything changed. That is when I changed.

My first dandelion, a relatively small one that strayed from the pride, was easily plucked from the ground with a single step and a quick twist. I remember the feeling that swept over me as I held it securely in the tines, as if I just caught a mouse by the tail. I felt the resistance of the trigger as my index finger curled into the grip. I remember being startled as the Weed Zinger suddenly released it's prey harmlessly to the ground with sufficient force to make me realize that there was far more energy stored in that shaft than I realized...and I was going to find it.

The next dandelion was not far from the first, in fact, there was a sea of yellow manes everywhere I looked. It is no small wonder that I wasn't over-powered by them. I centered the Weed Zinger over my prey and lightly tapped down. This motion caused some of the leaves to deflect inward slightly. As I continued to tap down I noticed more leaves deflecting. When I saw that almost all of the leaves deflected inward I drove the tines firmly into the ground stepping gently on the pedal and twisted with a purpose. I extracted the weed, aimed it directly at the trash can and with a sudden burst of energy propelled it into the can from about 3 feet away. This time I did not giggle but I did raise an eye-brow. I don't remember which one.

The weed was propelled with sufficient force for me to question the range of this device. If I can propel a weed 3' statically what would happen if I swing my arm outward and time my shot? Game on. As I mentioned earlier, as we age we are looking for a reason, a purpose and even a challenge. Most of us are competitive and I am my greatest rival.

Now my days are spent stalking Dandy Lions. The pride has been thinned to a manageable level with only a few challengers. This did not happen overnight. My expeditions lasted as many as 4 hours a day. "Just one more", I would say, with my sweat-soaked bucket hat pulled down to shade the Sun. Armed with only my Weed Zinger, custom-made shoulder holster and a bottle of water I pounced from prey to prey. My neighbors call me "Caddy Shack".

Now, the sea of yellow manes has been displaced by a sea of healthy green grass. The only yellow visible is on the near horizon (my neighbors yard). Sometimes, under the cover of darkness, I cross the border to poach unsuspecting prey.

PS: I routinely shoot Dandy Lions about 15' directly into the can. Now, if I can just do it from the comfort of my trike I would have the best of 2 worlds. 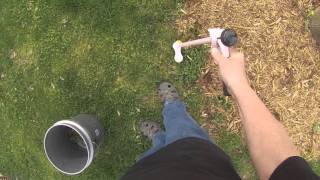 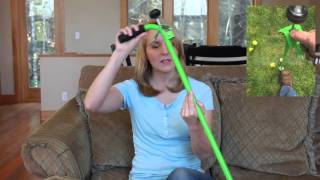 The Root...The Whole Root and Nothing But the Root.